Dear Manager/Coach,
I’m the umpire for the game you had today and would like to take the opportunity to talk to you about what I saw from my vantage point. Before I do, though, let me tell you a little bit about myself; not to ask for sympathy but so you have more understanding about why we umpires do what we do.
Like many umpires, we started umpiring when our kids were playing Little League and we learned to love the game. We love the game, not the team or the outcome. We accept that we will make mistakes and will do our best to overcome them and not let them effect our game. We train before the season starts and we meet together before every game to talk about possible scenarios we may encounter. Then we do a post-game to talk about what we actually saw because, despite what you may believe, we don’t want our decisions to be wrong.
So manager/coach, I was happy to meet you at the plate prior to the start of the game and was encouraged by your upbeat attitude. Your pitcher started out strong and the catcher kept me protected, for the most part. There are a few things that could help our game be a little smoother.
Would you tell your catcher that when he catches the pitch 6 inches off the outside corner or scoops it out of the dirt, and then moves it back into the strike zone, it’s still a ball. Don’t hold the mitt in the same position trying to tell everyone I got it wrong. He’s trying to show me up and I don’t appreciate it.
Don’t ask me where that pitch was. I called it a ball which means it missed the strike zone. You should be able to see from your position if it was too high or low. It not too high or low then it must have been inside or out so look to see where your catcher recieved it. Don’t pull in the fans into your verbal displeasure.
BTW, if you would teach your players, and coaches, what an infield fly is then we wouldn’t have to waste the 5 minutes of me explaining it to them during the game. Oh, and there is no balk at the major level.
Despite my wife telling me I can’t hear, I can hear your conversations in the dugout just fine. You blamed your loss on me rather than using the opportunity to teach the kids about responsibilty and character. Should I remind you about how many times your outfielder dropped the fly that had made it into his glove or the time half your infield celebrated a second out only to see a very attentive offense steal third base while you were hugging each other.
There were at least 3 times you could have had an out if you had just appealed the missed base at home. Am I the only one that pays attention that the runners aren’t touching the plate?
So manager/coach, I have big shoulders and can take the chirping and comments because sometimes I’m making the same comments to myself but please take the time to teach the kids about what it is to be a responsible adult. Teach them that all our actions have consequence, either good or bad. Teach them to keep their head in the game, stay focused and not blame others.
Manager/coach, what you provide to the kids is invaluable and I wish you the very best for your effort because it can be as unthankful as the job I have.
Seems we both love the game and sometimes baseball, like life, isn’t fair. 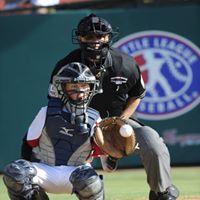 This is for Little League umpires from California Section 4 (greater Sacramento area) to ask questions, learn about rules/instruction, and share stories.